Soon after the end of World War II, the US Navy and the Office of War Mobilization and Reconversion (OWM&R) set about the task of establishing about 300 armories across the continental United States, making use of pre-existing, state-and-city-built military armories, as well as creating “new” quonset hut armories. As surplus war material, the quonset-hut-style armories (designated “Type B”) would minimize depleting already scarce building supplies, while enabling the Navy to provide Reservists with much-needed training facilities.
Briefly, a Type B armory was comprised of three prefabricated, round-topped quonset huts (each 40 feet by 100 feet in size) placed side by side and joined to a 20-foot-by-150-foot frame structure across one end of the huts, offering about 15,000 square feet of space. For training the Reservists, the armories were to be furnished with desks, chairs, and training equipment from the Navy’s stockpile of surplus war supplies. The average cost of this type of structure was about $180,000, not including installation of technical training equipment. 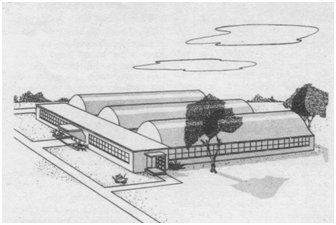 In February 1947, COMFOUR, the district commandant, praised the Organized Reserve Surface Battalion 4-18 in Lancaster, Pennsylvania, for their “conscientious effort and enthusiasm.” Lancaster was the first city in the United States to fill their Reservist Battalion to 100% capacity. Now all that was needed was the armory facility itself.
According to The Naval Reservist bulletin at the time, once a building contract was awarded it would take only about six to eight months before the training center would be ready to open. In October 1947, the bulletin reported that the building contract for Lancaster had been recently awarded. 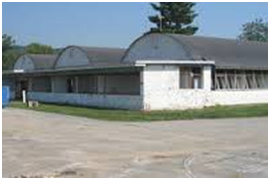 A year later in March, the bulletin noted that each Naval Reserve Center (NRCT) allotted and arranged
its internal space as needed to accommodate its constituent Reservists. Armory facilities could include office space, an enlisted men’s recreation room and officers’ wardroom. A typical layout may house “a carpenter shop, classrooms and a sick bay… in one of the prefabricated wings. The second wing contains an ordinance room, electrical shop, and radio room, while the third hut provides space for electronics and transmitter rooms, forge and maintenance shops, lockers, and a boiler room.”
Lancaster’s former NRCT is now known as the Naval Reserve Building on the Clark Street Branch Campus of Thaddeus Stevens College of Technology. Though the quonset huts are long gone, the remaining 3,000 square-foot building is being rehabbed under the guidance of The .918 Club of Lancaster for use as a hands-on letterpress classroom and exhibition space in conjunction with the college’s Visual Communications Department.